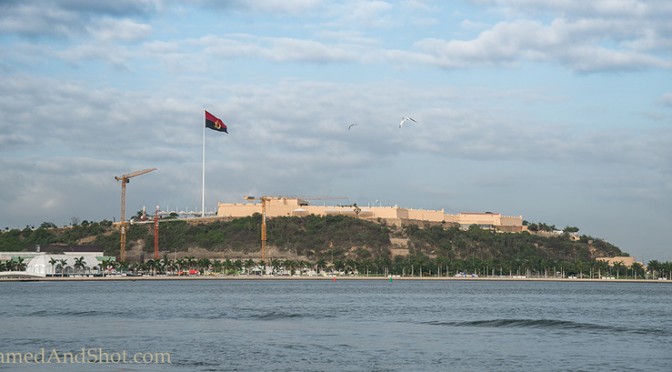 Overlooking the bay of Luanda is the Forteleza de São Miguel, the oldest building in the city and certainly the most impressive. It was built in the late 1500’s and was a self-contained town for many years. Later, it became the hub for the slave traffic from Angola to Brazil – a dark time in the history of this country, but one that is important to remember. Today, the fort serves as a military museum and boasts a beautiful view of the city and coast.

Unfortunately, a developer is rapidly hiding this landmark by building a shopping mall smack-dab in front of it. We complain about the lack of zoning in Houston, but I cannot imagine any developer being granted the rights to build in front of such an important building. Just another example of how money is the supreme power in this country.

From our balcony, our view is also being obscured by the building of yet another skyscraper – but a tiny sliver remains. A few days ago, a friend was visiting me and we heard a very loud explosion. A few seconds later, another loud boom. We rushed to the balcony to see if a bomb had gone off somewhere. Gunshots are heard periodically around our building, but normally they are at night and never this loud.

With so much going on in the third-world these days, loud explosions are never good. Even fireworks give me the heebie-jeebies lately. But, looking down at the people milling about on the street, everyone seemed unfazed by the noise. Thank goodness, we thought. People running for cover is not what we wanted to see. Then, as we turned our eyes to Fortaleza, we could see a ball of fire and smoke, and a split second later, another boom. As we looked closer, we saw men in uniform gathered along the thick fortress wall, obviously lighting up the still-functional cannons. Oh, okay! So those are soldiers and this is a controlled display of firepower, not the latest news story about terrorists.

We had heard that the President of France was in town for a visit, so clearly the military was just showing off a bit. We assumed – though not confidently – that the canon balls were blanks. Here in Luanda, you can’t throw a rock without hitting a guy with an AK-47 strapped to his chest. Men with loaded guns are everywhere, all dressed in a variety of uniforms. With the Angolan’s obsession with  weaponry, it would not be surprising if real cannon balls were flying. Like I’ve said before, never a dull moment…

While finding guns in Luanda is apparently an easy task, finding certain food items is not. For example, dill pickles are not available here. It may be hard to believe, but they were hard to find in London, too.  When we lived there, I actually brought back a quart-sized jar in my suitcase – in bubble wrap, of course – and prayed the jar did not break and spill pickle juice all over my clothes.  I simply could not abide those sickly sweet things called gherkins found in the UK.

Nope. The pickles I grew up with are so sour they make your eyes water, crunchy, kosher dills – and nothing else will do on my sandwiches.  So, what’s a picky pickle-eating girl to do?  Why, make her own, of course! So, I looked up a recipe and pulled together all of the ingredients.

In case you were wondering, the pickles came out perfectly – very tart and spicy. Of course, I always took such items for granted in the US, but it’s these little touches of home that keep me sane here in Luanda. Cannonballs may be flying, but I’ve got dill pickles on my sandwich, so life is good!