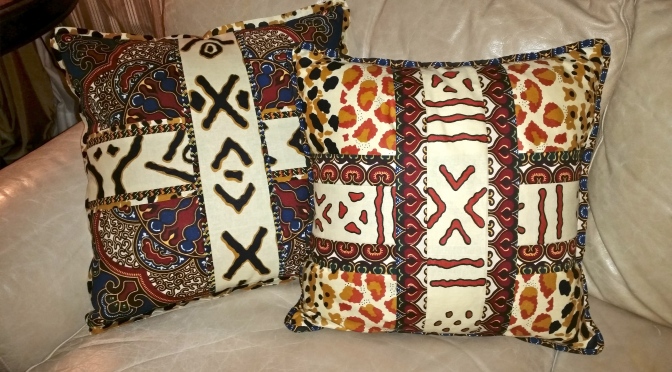 Somebody stop me! I can’t stop buying these beautiful African fabrics. They are as addictive as any controlled substance. Granted, there is not much to do here – and no clothes shopping at all – so I have to fill my days somehow. Until recently, I merely bought fabric and never actually did anything with it.  I was simply stocking my shelves and waiting for inspiration to strike.  In the past couple of weeks however, my huge stack of fabrics has become completely inadequate, as ideas for projects are flowing like the Kwanza River.  Pillows, casserole caddies, book bags for kids at the orphanage, quilts, tablecloths…oh, and did I mention pillows? These bright, vibrant patterns are so much fun to mix, they beg to be cut into pieces and sewn together.

The possibilities and projects are endless, but buying fabrics here is like a scavenger hunt. Of course, there are always the ladies on the street, with fabric stacked high on their heads, but much of this fabric can be low on the quality scale. Benfica, the large craft area I mentioned in a previous blog, is also an option. But, it is a long drive and filled with overzealous merchants who follow expats like me around until they wear us down. I tend to buy fabric I don’t even like, just to make these guys go away.

Undoubtedly, the mecca for fabric shoppers here is a place south of town call Sao Paolo, which I have been to only once. It was over a year ago, and we were here on our look-see visit.  As a wide-eyed visitor, one of the long-time expat ladies took it upon herself to show me the ropes. I will call her Mrs. Lisbon. A native of Portugal and expert on life in Luanda, she was the ideal guide for a nervous newbie like me.

One morning, Mrs. Lisbon offered to show me some fabric shops and asked if my driver could transport us.  As she and another expat lady crawled into my car, Mrs. Lisbon spoke quickly in Portuguese to my driver, a very meek fellow who had been assigned to me for the week. I had no idea what she was asking him, but he clearly wanted no part of it.  After a few minutes of this back and forth, he finally gave in and agreed to drive us to Sao Paolo, a place I learned later is in the “red zone” for our drivers. Crowded, dangerous and prone to raids by the police, it is strictly off-limits. In fact, Mrs. Lisbon’s own driver would not take her. As powerful as her charms were, I guess he valued his job a bit too much. Of course at the time, I knew nothing about the dangers of the place, and was simply along for the ride.  Ignorance is bliss, and I was happy as a clam.

As we approached the long, pot-holed dirt road in Sao Paolo lined with shops, my driver was clearly nervous. I assumed his white-knuckle grip on the steering wheel was because he was having a hard time finding a place to park.  Later, I learned that cars are often vandalized in Sao Paolo, even with the owners very close by. I’m sure he was sweating the possibility of explaining a damaged vehicle to our company, especially if it had occurred in an area he was supposed to avoid.

After about ten minutes, he finally found a place to park, and declared that he was staying with the car, which was clearly more important to him than we were. As we got out of the car, Mrs. Lisbon directed me to stay very close to her and tuck my purse under my arm. This made me a little nervous, but I mustered my courage and kept a death grip on my bag.  As we walked quickly along, we peered into one small doorway after another, each one revealing poorly lit rooms with colorful fabric stacked floor to ceiling. Mrs. Lisbon was looking for a particular shop that she knew carried the very best fabrics and selection.

Once she located the shop, we walked in and up some very steep stairs, revealing a maze-like set up. Thousands of yards of fabric loomed from all sides and immediately overwhelmed me. There were just too many choices!  The stacks were vaguely divided into makeshift booths and each booth’s owner stood ready to negotiate over their colorful wares. No prices were posted, but Mrs. Lisbon informed me that each bunch of about six yards of fabric cost between ten to twelve dollars. Cheap as chips – literally, since chips (or crisps, as the British say) are about ten dollars a bag here!

Choices had to be made quickly, as the ladies began to open up and display yard after yard, all the while giving me their best sales pitch. Within moments, dozens of patterns and colors were laid out before me. All I could do was close my eyes and point. In no more than fifteen minutes, I had purchased as much as I could cram into an already full suitcase. Much to my husband’s dismay, I dragged that fabric back to London with me, where it sat in a corner for a full year. When we moved here to Luanda the following September, that same fabric made the four-thousand mile trip back here, and is finally being put to good use.

After we moved here, I heard one Sao Paolo horror story after another, although my trip had come off without a hitch. Apparently, pickpockets frequent the area and make no attempt to hide what they are doing. One lady I spoke to was robbed twice on the same trip! The occasional police who patrol the area only bring chaos when they arrive. You see, technically it is illegal to sell items on the street, even though there are people throughout the city selling everything from fabrics to food to toilet seats. Occasionally, the police will raid areas like Sao Paolo. Coming in like gangbusters, they hurl the ladies’ wares into the muddy street, or smash produce with a billy club. I have never heard an explanation as to what prompts these raids, but I have no desire to see one firsthand.

Today, I asked my driver where to find nice fabrics here in town. He took me to a lovely shop filled with artwork, carvings, decorative items and a very small section of about fifteen different patterns.  I paid the equivalent of sixty dollars for a six yard piece – roughly six times what I paid at Sao Paolo! Did I overpay? I’m not so sure. There weren’t many patterns, so the choices were easy. The place was air-conditioned, my purse was safe on my shoulder, and there was no danger of being caught in a police raid. I think sixty dollars was a true bargain, here in the world’s most expensive city.