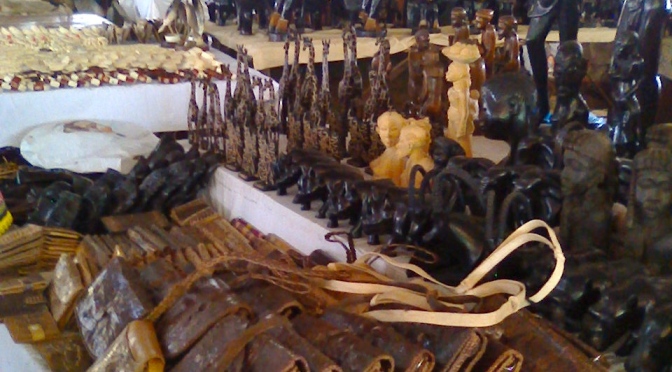 Shopping is cheaper than a psychiatrist – and you know I am all about saving money.  As a child, whenever my mom told my father that she had bought something on sale, my father’s response was always, “Woman, you are saving me right into the poor house!”  Well, the apple didn’t fall far from the tree.  I have done my share of hunting for bargains that I really did not need.  But while the tide has turned in my husband’s favor with regards to my cooking, I now have the upper hand on the shopping front.  People, my husband has moved me to Africa.  The way I look at it, shopping is a matter of sanity preservation.  Besides, there is some really cool stuff here! No more shopping for African-inspired items.  It’s time to buy the real thing.

To that end, today I went with a group of ladies to a local craft market called Benfica, about a half hour south of town.  It is a busy, covered, outdoor market filled with row after row of artists peddling their wares, from paintings to wood carvings, and even some illegal items to boot.  If you have ever been to a bazaar in Mexico, or something similar, then you know that as soon as you look at something for more than about 3 seconds, you have now entered into a negotiation.  And heaven forbid you touch something!  Well, you might as well just get out the cash, because it will be yours!

Yes, Benfica is home to some master negotiators and they do not like to take no for an answer.  Hubby and I had found that out the hard way a few weeks earlier, when we made a quick stop on the way to the beach. We were so overwhelmed by the sheer volume of exotic goods and overzealous salesmen, that we only stayed for about fifteen minutes. No. To do this place right, I knew that I would have to go back with a pro – someone who had lived here awhile and knew what things typically cost.  And preferably this pro would be a woman.  Men seem to get all hung up in the “need vs. want” argument.  That can really slow things down.

We arrived at the market to find that it was much hotter than any of us expected.  Immediately upon getting out of our air-conditioned cars, we all began to sweat – or “glow” as we Southern girls say.  Let me tell you, I was glowing like a pig.  Africa is hot y’all – and it is not even summer yet! We began on the end of the market that held many colorful paintings and beautiful African batik fabrics.  A young man dressed in some of this bright fabric came up to greet us.  One of the ladies knew him, and he would be our “helper” for the day, acting as interpreter and negotiator.  Of course, since I do not speak the language, I have no idea if he was actually bidding the price up rather than down, but it certainly was nice to have someone there who spoke English!

Things started out well.  I bought some beautiful fabrics and felt pretty good about what they cost.  Not cheap, of course, but certainly reasonable.  Now came the real challenge: gorgeous carvings of every description, from elephants to giraffes to masks of every size. How do you ever decide!

As it turns out, the decision was made for me.  I saw a beautiful Sable Antelope, also called a Palanca, carved in a deep, ebony wood.  This is the national symbol for Angola, so I knew that I wanted one eventually.  I picked it up to get a closer look and wham, bam, I was handing the artist a large stack of bills!  It’s like someone else was speaking through my mouth, it happened so fast.  Somehow, I had managed to get him down to half of what he originally quoted me, but only because that was literally all I had in my wallet!  Apparently, I’m really good at negotiating when I am broke. Oh well.  Regardless of whether or not I was ready to buy, I do love my new pet.  Isn’t he purdy?? 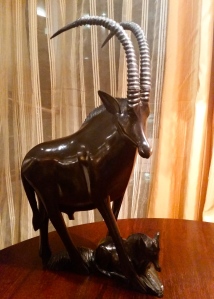 At the end of the day, I learned a lot and came away with something I really love. But next time, I think I will keep my hands in my nearly empty pockets, because at Benfica – you touch, you buy.  And I’d like to actually remember negotiating for whatever I bring home!

2 thoughts on “Shopping is cheaper than a psychiatrist…”