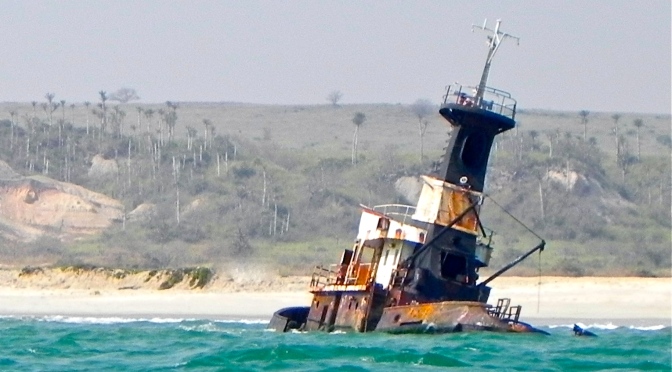 The wonders of this country never cease to amaze me. This past weekend, we went out boating with our friends Mr. & Mrs. G and saw another fascinating sight just north of Luanda called Shipwreck Beach.  The term “Skeleton Coast” is a familiar one to many of us, but for me, I did not know exactly what it meant until I moved to Africa. On our recent trip to Namibia, we skirted the southern end of this famous stretch of coastline, but were not far enough north to see any of the hundreds of shipwrecks scattered along the shore. The wrecks in Namibia were caused by submerged rocks and the legendary fog that routinely blankets the Namibian coast. In Luanda’s smaller-scale version, the wrecks were caused by man, rather than by Mother Nature.

Shipwreck Beach is an area of impressive cliffs, golden sand, and dozens of huge, rusty, abandoned ships. There are several theories as to how they came to be marooned here. Some say they rusted away from their moorings in Luanda Bay and drifted to the beach. Others say they were deliberately sunk by the departing Portuguese troops as they were forced out of the city – a sort of “up yours” after a bad break-up.

Shipwreck Beach can be reached by car, but the beach area is not entirely safe, so it is best seen by boat. Since I had never seen it before, Mr. & Mrs. G offered to take us there after we tried our luck at whale-watching and fishing first. After an hour or so of cruising and a lovely lunch, we had encountered neither fish nor whales, but we did come upon a large pod of dolphins.

Honestly, in a contest between fishing and dolphin-watching, Flipper is the clear winner every time. What could be more fun that watching those friendly, intelligent mammals frolic in the wake of the boat? 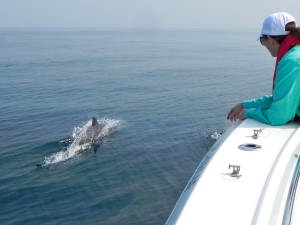 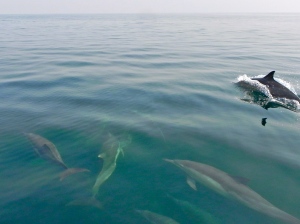 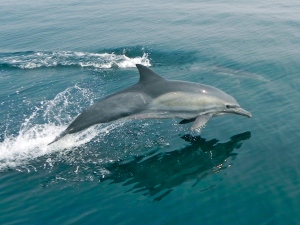 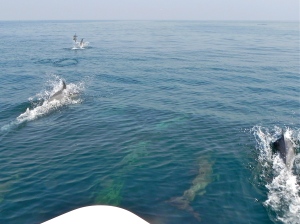 And when one particularly frisky guy decides to jump up and splash us – not once but twice – all cares of the day just vanish away.

After playing with the dolphins for awhile, we headed towards the coast, and a huge cliff complete with a red and white lighthouse came into view. 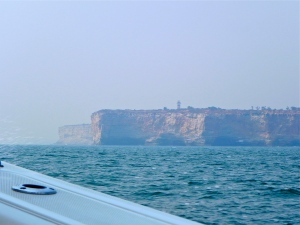 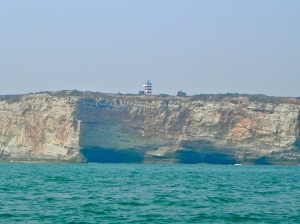 When the seas are high, the waves crashing along this cliff are quite impressive, according to Mr. & Mrs. G. I was just as happy to have calm seas, however, as big waves can also mean feeling a little green-around-the gills.

As we sailed along this impressive cliff, the rock color changed from buff to a chalky white, and it bore a remarkable resemblance to the White Cliffs of Dover.

Soon, a few shipwrecks appeared in the distance.

The ghostly, abandoned ships looked like the perfect backdrop for the next post-apocolyptic blockbuster. One can only imagine Mad Max racing along the beach as hordes of bad guys pile out of these rusting hulks to join the chase. 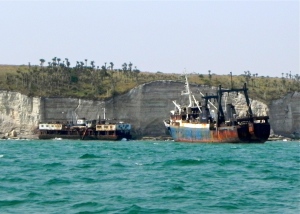 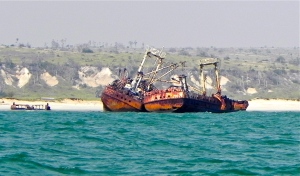 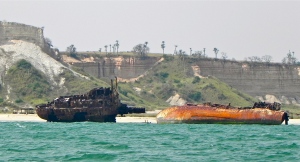 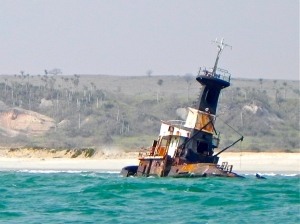 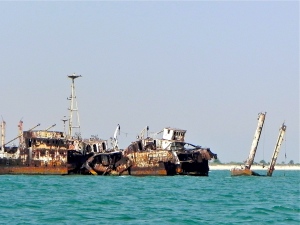 What tales these ships could tell, about the men who sailed them and how they came to be forever stranded on the beach. For now, they serve as a reminder of the wastefulness of war and the scars men leave on our beautiful planet.

Once we were past Shipwreck Beach, we entered Luanda Harbor, with plenty of huge ships of its own. Luanda Harbor is one of the few places in the world where a small boat like ours can get up close and personal with huge container ships, and no one seems to notice or care.

Near the marina, there is a sailing school that operates on the weekends. It is always great fun to see the local youth learning to sail, and a nice way to conclude our day out.

From rusty shipwrecks to tankers to tiny sailboats, there is always something to see in these waters!