A remote lighthouse at the end of a deserted, windswept beach filled with beautiful flamingos. Sound romantic? Our experience staying at the Pelican Point Lighthouse in Walvis Bay, Namibia was indeed romantic but with a few unexpected twists. Oh, the lighthouse was lovely. The flamingos and people who ran the lighthouse were even lovelier. But, driving there? Now, that was anything but romantic.

We arrived in Walvis Bay, picked up our rental car equipped with a navigational system, and attempted to input Pelican Point. No luck. We had been sent a simple map and written directions (odd as they were), so off we went through the small and tidy town. Walvis Bay is another German settlement in Namibia, and boasts a lovely waterfront drive with nice homes and a large lagoon filled with thousands of – you guessed it – flamingos. This turned out to be a frequent photo stop, and resulted in hundreds of shots of these graceful, bubble-gum pink beauties.

The heavy concentrations of small mollusks, algae and plankton in the lagoon attract flamingos and other shorebirds in astounding numbers. During the dry season, there are typically around 50,000 flamingos in the Walvis Bay area! It was quite a sight to see.

We drove on, past the lagoon and into an area of salt-flats, turned pink from the large amount of brine shrimp in the water. A small salt factory had pink salt piled high, waiting to be processed and sold. Once past the salt factory, the last real landmark on our map, there was nothing but sand as far as we could see.  No people, no cars, and no buildings – just deep sand and plenty of opportunities to get stuck.

We stopped, let out about a quarter of the air from our tires, put the car in four-wheel low, and pressed on. Not surprisingly, this kind of driving is not what we are used to. This was nothing like the freeways in Houston or the crowded mayhem of Luanda. Here, the closest thing to a “road” is to pick a set of tire tracks and follow it until it gets jumbled up with another set. Of course, all of this has to be done at the fastest speed possible, and no stopping to take pictures is allowed. Stopping is the kiss of death when driving in deep sand, and no wrecker service is coming along to help a stuck tourist who decided he needed one more flamingo shot.

We knew the drive to the lighthouse was ten miles long and would take a full hour. But, our path on the map from this point was designated by only a dotted line, so we hoped we were going the right way. Ten miles of white-knuckle, hold-your-breath-and-pray driving. The only marking on the map in these ten miles was a supposed “fork in the road”. What fork, we wondered. What road?

Oh well, just kept driving, we decided. The sand will run out eventually. So, we gritted our teeth and lurched forward, our eyes searching the horizon for any signs of civilization.

After bouncing from one set of tracks to another for what seemed like hours, we could finally see the lighthouse in the distance. Hallelujah! At least now we had a target to shoot for, but getting there was far from a done deal. Even if there were no obstacles, such as deep puddles or large nail-studded pieces of wood, we found that it was impossible to stay in a set of tracks for very long. Once we picked up speed, our car would fishtail and we would be launched out of the tracks and into deeper sand. My hands were sore from gripping the door handle, even if my husband seemed to be having fun. Next trip, we are going to a spa. No discussion, buddy.

After many more minutes of dodging foot-high berms and swerving back and forth in an attempt to follow the most pronounced tracks, we finally reached the lighthouse, all alone at the end of the beach.

We stopped to let down the chain across the entrance and it finally happened. We got stuck. Apparently, it happens to everyone, so the manager, a very friendly fellow named Hugo, came out quickly to help.

As we were checking in to our room, Hugo let us know that he and his wife, Roseweatha, were only there temporarily, and only as a favor to the owner. All of the regular staff, from the former manager all the way to the maid, had quit en-masse three weeks prior to our arrival. We never did find out why the staff had so abruptly departed, but Hugo and Roseweatha had done an admirable job in getting things up and running in such a remote location.

The two of them were quite outgoing and talkative – and originally from Angola, of all places – so we felt an instant kinship. They had been in the middle of building their dream home in Botswana when they got the call to come fill-in at the Pelican Point. Having many years experience managing living quarters for oilfield service companies in Angola, they were well-versed in finding staff (most importantly an excellent chef) and bringing things up to a very high standard. The Pelican Point had always been known for its gourmet food, a good thing since the remote location meant no one with half a brain would drive to Walvis Bay for dinner.  Although we have no idea how things were right after the mutiny, Pelican Point was running smoothly now, and so we were happy.

We settled into our clean, modern room and then went for a walk on the beach, hoping to get close to one of the large groups of seals sunning themselves on the sand. Luckily, we were upwind of these fascinating but rather smelly creatures, and were able to get close enough for a few good shots before they scampered off into the water.

We then walked over to the windward side of the narrow, peninsula-shaped beach and could see more seals frolicking in the waves.

Seeing such abundant wildlife had made the effort to get there worth every tense moment. But, there was another facet to our stay that we had not anticipated. The remote location meant that everything ran on a generator. All electricity went out promptly at ten o’clock at night and did not come back on until six o’clock the next morning.  No worries. Dinner and bedtime just came earlier than we were used to. Truly, our days had been so full  that this was a welcome change.

The next morning, we made the long trek back into town  for a Sandwich Harbor tour, with its massive sand dunes that come right up to the water. Of course, these dunes beg to be climbed, and with my newfound sand-climbing skills, I was ready to go (yeah, right!).

Timing is tricky when getting to and from the dunes, as high tides completely block off the path. We made it out just in time.

After a brief stop for lunch on top of another dune, we explored the area just behind the sand, and were able to see just how shallow the water table is in this area.

Our guide dug down about a foot and easily reached fresh water, which is forced upward when it encounters the heavier saltwater along the coast. We so enjoyed our day exploring such a unique coastline.

On the way back to the lighthouse, we spied a group of jackals roaming along the beach. Not nearly as scary-looking as their name implies, we enjoyed watching them frolic on the beach. That is, until one of them caught and began to tear up a cormorant, and we were reminded of their predatory nature.

The next day brought another tour with the same guide, but this time we were exploring the Namib Desert and we had the guide to ourselves. Here are a few of the highlights of our day:

After our fun day in the desert, we headed back to the lighthouse for a lovely sunset and another gourmet dinner. 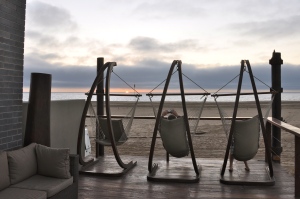 Despite the bright moon, we managed to get a few star shots before it was time for a good night’s sleep.

We would need our rest for the six-hour, dirt-road drive back through the desert to Windhhoek the next day.

Until this point, everything had gone pretty much according to plan in this “most civilized” of all  African countries. The next day brought a few new challenges, and a scary reminder that we were definitely not in Kansas anymore…